The dimensions, shape and features of the land led to the conception of a building project whose main strategy was to build lengthways and horizontally as opposed to upwards.
Despite the far-reaching nature of the project and the different areas required, the project managed to give a uniform feel to the building. The architectural composition of the building was achieved using simple geometric shapes, which when added to, or when sections are removed or merged together, result in a more complex building. The “pieces” are prism shaped and L-shaped sections are inserted into them which contain and hide the necessary installations inside them.
The materials used for the exterior finishing of the building were cement, phenolic panels, micro-perforated metal plates, metal sandwich panels and glass.

A single-storey building was planned with the technical areas in the roof area, which takes up practically the entire North-South part of the plot. The parking areas are located in the East-West part of the site not being used for buildings.
The building has a simple and flexible organisational layout. Past the entrance to the hospital, which is the building’s most public side, the building has greater privacy in the part which stretches from the West to the East wings. The “Events Hall” is accessed via a hallway and the Cafeteria and General Administration are located there. Behind this are a number of rooms used for Inpatients, Outpatients services and General Services, with a number of interior halls, which filter the people accessing them and lead to the most restricted area of the hospital, where the doctors’ offices, laboratories, X-Ray rooms, A&E, the Surgical Wing, ICU, labour ward and the morgue are found. In the southernmost part of the hospital, the building is finished with an area designed exclusively for the installations, and the delivery and maintenance entrance is also in this area. 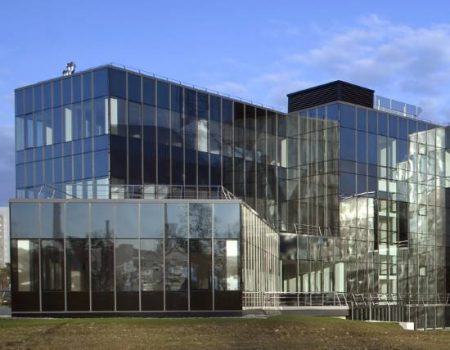